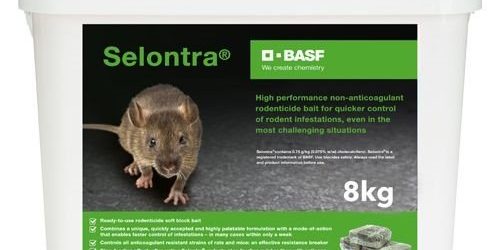 At XPPC we are very keen advocates of the CRRU hierarchy of Rodent Control. We will do everything we can to avoid administering Rodenticide, preferring to keep the pests away rather than having to deal with them when they get somewhere they shouldn’t!

When we have to use poison, the resistance to certain baits is one of the biggest challenges the Pest Control sector faces. A new arrival on the market is Selontra® which is based on the non-anticoagulant rodenticide cholecalciferol, at 0.075%, presented as a highly palatable soft block formulation.

Cholecalciferol is effective against anticoagulant-resistant Norway rats and house mice. It is not bioaccumulative or persistent and therefore presents relatively lower secondary poisoning risks to non-target species, such as birds of prey, compared to second generation anticoagulants.

Selontra® will control rodent infestations up to three times faster than with anticoagulant rodenticides, even large infestations may be controlled within as few as seven days.